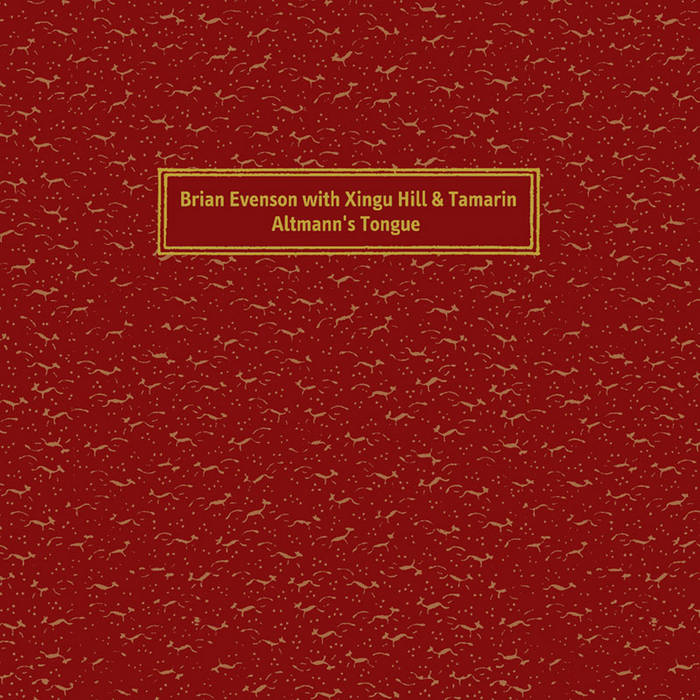 upon the circulation of his first short story collection, altmann’s tongue (knopf, 1994), author and professor brian evenson found himself out of favor with his spiritual home ground, the church of jesus christ of latter day saints - the mormon church. since that time, evenson’s incisive, acerbic writing about the medieval brutality of contemporary humanity has gone on to garner significant praise, and not a few distinctions.

the creation of altmann’s tongue - which features brian evenson reading selections from several books through a sonic fabric created by xingu hill and tamarin - proved to be similarly cataclysmic, although of markedly different scale. on the surface, altmann’s tongue appears to be a simple spoken word project backed by experimental sound design and post-industrial ambience of a distinctly harrowing nature. however, brian evenson’s readings, recorded in an impromptu fashion in a sparse white apartment, begat an intensity of emotion that compelled xingu hill and tamarin to work for over three years on musical reactions that could equal the sentiment of evenson’s recordings. musical reactions, ranging from morose synth rhythms to enigmatic drones. evenson’s verbal recordings and the music feed upon themselves like the ouroboros, like the snake which grows by eating itself. ant-zen is proud to present altmann’s tongue as a unique, compelling collaboration between a thought-provoking author and two exceptional sound experimentalists.


brian evenson:
brian evenson is the author of several books of fiction, including altmann’s tongue, father of lies (four walls eight windows, 1998), contagion and other stories (wordcraft of oregon, 2000), and dark property: an affliction (four walls eight windows, 2002). his writing is best described as grotesque, beautiful and magical. he describes the life we see out of the corner of our eyes.

evenson is the recipient of a nea fellowship, an o. henry prize, and a glenna luschei prairie schooner award. his short fiction has appeared in the paris review, conjunctions, the quarterly, prairie schooner, third bed, the southern review, and a number of other magazines. he teaches in brown university’s creative writing program, and is a senior editor for conjunctions.


xingu hill:
since 1995, john sellekaers has worked as a full-time composer, performer and producer. he has released nearly 40 records under various names, including xingu hill and dead hollywood stars. these releases have appeared on both european and north american labels. sellekaers has remixed a dozen songs for other artists, and his tracks are featured on 50 compilations. he has played more than a hundred concerts in europe, north america and australia. his music lives in the borderlands where atmospheric, experimental, psychedelic, and rhythmic concepts intersect.


tamarin:
tamarin is daniel de los santos’s (mostly) solo project, which utilizes repetition, samples, beats and noise manipulation. recently, tamarin has evolved into a project that is more focused on experimentation and what is and isn’t 'music.' tamarin has two full-length albums (on frozen empire media), a 7' (on de los siete), and remixes on mad monkey and circumvent. in addition, there will be a collaborative cd with merzbow in early 2005 on frozen empire media.