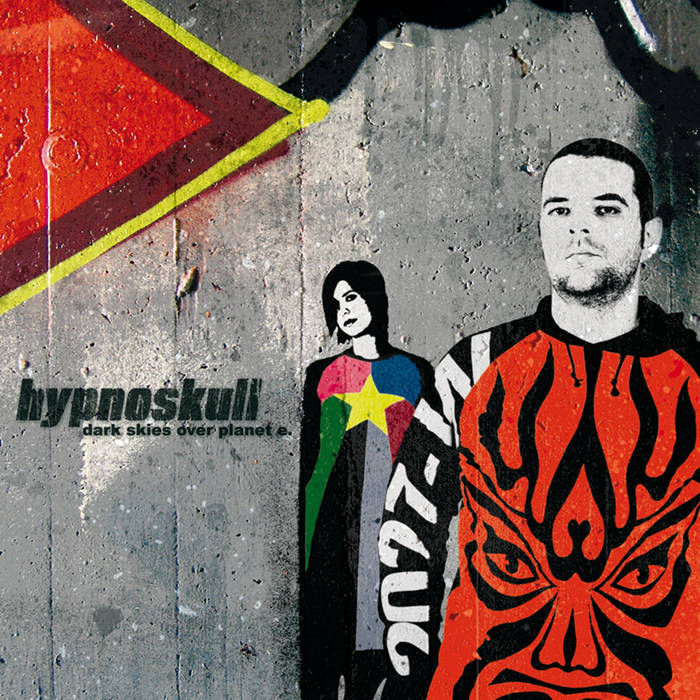 ‘dark skies over planet e.’ contains no less but 16 groundbreaking new tracks and an additional bonus 6-tracker ‘urban territory intruders’ featuring only collaboration tracks with the following projects: defragmentation (usa), needle sharing (g),sickboy(b), the mike vanraspaardenquartet (b), urban punk assassin (b) and actdramatik (b). this album is the pearl on more than a decade of hypnoskull-activities and is set to top even the highly rewarded ‘electronic music means war to us’album. bringing once again a very eclectic mix of various underground-electronic-astyles with a sharp edge, this album will please both open-minded industrial as well as other audiences.

the album also includes the ‘100 test channels’track for whichhypnoskullasked 100 people to send in 5 seconds of audio. the result is a collection offieldrecordings, sounds, noises from whole around the world in just one track.

the cover and booklet were designed by salt at ant-zen, photography bytina tuypens. clothing by walter vanbeirendonck.

dark skies over planet e.
"it’s been a while ago since i’ve been here. why should i, that’s what i ask myself from time to time. when i enter the sick world, that must be every day, i want to be there. and when i’m there, i want to go back. i don’t know. as the dark skies pack over planet e., i realise that i need to go there every now and then. it makes me go and it makes me do all that shit they want me to do. i am not tormented, neither i carry a heavy heart, neither i’m happy all the time. the frozen army of drummachines takes over control again, and honestly, they frighten me. i can’t control their behaviour. these naughty machines give me the creeps every time i walk by. they don’t listen to their master anymore. they live their own digital adventures in gigabytes and arpeggio’s and non-stop beat inferno. if i interfere too much, they get mad at me. they start a riot against my demands. they refuse my orders. in a way i like their juvenile behaviour and their complete anarchy. makes me feel younger all the time. but still they frighten me. i don’t know what they will do next time. in the meanwhile, this big terrorstress takes over the planet. bombs explode, attacks, conspiracies everywhere. and what it does to our society. these people will go all the way and they want to reach their ultimate goal. i don’t understand these people. i never will. who bears the truth anyway ? we all share the same destiny. we all die one day. i feel like this elektromutant that doesn’t fit the scheme. standing at the sidelines of what’s out there. ready to enter the empire of broken dreams, illusions of safety and constant danger. it’s all a big lie. based on the deepest nightmares people have. fear as a weapon of mass-destruction. bassreflexx countdown for a small period of war against fear. some minutes of concentrated aggression against the aggressors. some minutes of disconnecting the real from the imaginary world. breathe all energy that emerged during these minutes. image flash, capture it and fly 15 feet above them all, cause you are more. you know how to handle your dark side. you have the brains, the guts and the nerves to put yourself above the lowest sides of human nature. now slow it down for a minute or two to concentrate on this state of being. and don’t mess with the big s., for sure. after a while the effect will go away, like a system syntax error popping up on a green monochrome screen of an old homecomputer after entering a bad poke injection. and there you are again. here comes the stress again. the global e. of our society, the future clash of the titans. stress as the new e. ready to bring you right in the middle of the center of the cyclone. this place has seen better days, it wasn’t so bad, so long ago. i win, you always lose. this state of being, this terrorstress again, repeat your method, repeat your mission. fight the fear. assault code free the floors pops up on every screen around and the beats will take over again. massively. not even 100 test channels will change that, not even for 5 seconds, but they might change your life.

100 test channels
in april 2003, hypnoskull and escape 3 organisation launched a call for sound and audio. we asked people to send in 5 seconds of audio, it could be anything, from fieldrecordings to small songs, beats, noises, comments. in may 2004, hypnoskull reached the 100th participant and started to cut and paste all these audiodocuments into one track. these bits of audio come from whole around this planet and are the result of a global view on music, audio and networking.

urban territory intruders bonus 12”
it’s time again to let some people intrude our territory ! it’s such a solitary thing in that mind of mine, sometimes an intruder needs to mess things up so seriously it becomes funny again. as people are getting used to hypnoskull albums being packed with tracks, i wanted to push it even further with this dark skies over planet e. album and i decided to invite some people to join in for a serious soundfight and some bonus material. excuse me for the wicked sidesteps you will hear every now and then, but i fucking like it. so the dark skies over planet e. album contains 16 tracks, and the urban territory intruders 12” contains 6 more. makes a total of 22 tracks on one disc. bet you won’t find packed albums like these for the same amount of money very often anymore. what you see is what you get, what you hear will bomb your head. i could easily make two full albums with collaborations and remixes by some other friends and artists, so you can imagine how tough it was to limit myself for some 6 projects to join in now..."


'dark skies over planet e.' is a new chapter in hypnoskull's history. the project is well-known for hard and speedy industrial-tekk dance tracks but this time they collide with ultra-fast breakcore and even hip hop - once again, patrick stevens takes no prisoners. with this release you receive a huge variety of styles and feelings over a period of 77+ minutes, especially when you consider the bonus tracks - tracks such as the collage oriented piece, '100 test channels', and the drum’n’bass/jazz influenced, 'urban territory intruders'. let the sun set and watch the dark skies over planet e.!