electronic music means war to us 2 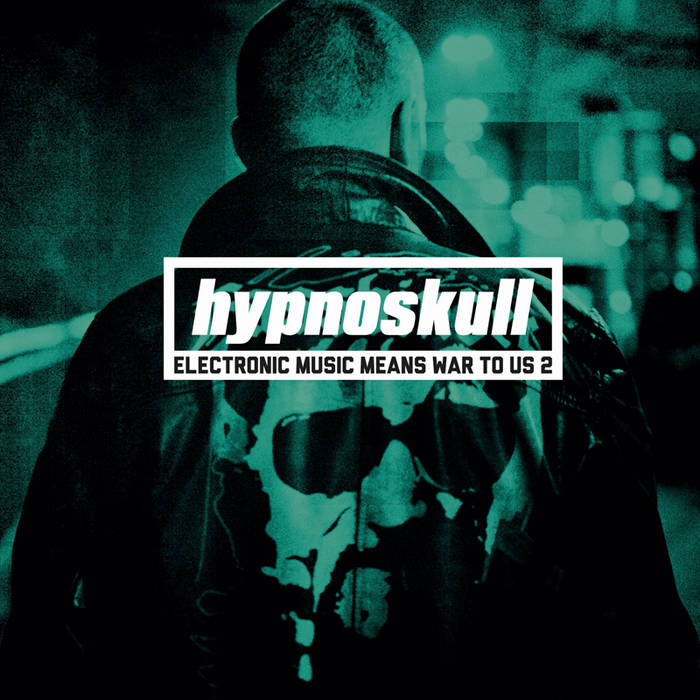 electronic music means war to us 2:
more than a decade after 'electronic music means war to us' patrick stevens showcases his updated aural statement, ready to burglarize listeners' minds and bodies with a heavy load of uncompromising sound barrages. this album has its focus on classic rhythmic industrial: repetitive hard-hitting power rhythms layered with violent noisy clashes, corroded synth textures and incidental voice samples. six collaborations with artists from all over the world like needle sharing, dissecting table and cyboresis add to the stylistic variety from heavy overdrive hardcore, grind/death metal vocals, power noise and ambient to the beat driven hypnoskull tracks. an aggressive, confrontational album with a high amount of club playability that perfectly brings out the essence of rhythm based electronics.

no one ever wins. we are all losers, and moreover, that's what unites us. the subtle differences between the way we walk through this sinister short piece of time they threw onto our souls the day we got thrown onto this doomed planet are merely details, not worth talking about, if you look at it all in the bigger perspective. yet, it is what it is. we are true masters in letting ourselves go. we are true masters in absorbing ridiculousness and simplicity, mediocrity packed as truth, messages by the chosen few, the pack of wolves exchanged by a pack of marketeers serving conglomerates of the new self-declared popes of this world, not in charge of churches, but companies.

the logo as the new crucifix. say thanks to the way you go, it's all because some ceo. since we are all losers, we are all victims. victims who don't deserve compassion. on the contrary. it's your all own fault. no one forced you to be a willing follower, no one forced you to give up resistance. no one forced you to not question the true reasons of it all. no. you are the one who keeps the entire system you occasionally rant about on social media alive. your protest became virtual. a way to ease your own mind. to make you think you do something about it. no one questions they use for example exactly that machine for it which was produced in some shitty asian factory where the workers hardly survive with what they earn, and probably die way sooner because of the non-existing protection of their health at their workingplace. too bad.

what the hell happened to subversive thinking. seems like someone left it behind a couple of decades ago. it's getting even worse. subversive attitudes became a pose. an element to be cool. like some fashion-accessory. it's easy to pretend, it's hard to do for real. it's getting worse. your depressions pile up so fast, you probably need wings to stay above them. you are not in control. you never were, but now, you don't even decide small things for yourself. and those fears. seems like a thousand centuries ago, the age when you could form a scene with a bunch of outcasts who didn't fear the unknown. on the contrary, who were attracted by the unknown in such a radical way, like as if a giant magnet was pulling a couple of hundreds of steel nails. borders didn't exist, experiments were free and beyond imagination, living was fast, somehow dangerous, but to the full maximum. now.

welcome to the age of all-paralysing fear. the kind of fear which is marketed by the new wave of conservative followers all around this globe. the new conservative dresses once again up in suits, but didn't refuse the thematics of their ancestors. law and order, rules and new definitions for what they believe should be the 'standard'. their standard. thankfully using and abusing the ancient concept of 'fear'. once again picking and choosing well selected enemies which can be easily blamed 'for what goes wrong' in their idea on how a society should look like. shameless opportunism, displayed vulgarly. taking a stand only for those they consider real and pure enough. pushing down anyone with a different view, no matter what. the new conservative lacks what their enemies have too much : empathy. that makes them more dangerous then ever before. their thinking infects all layers in society. the majority copy/pastes their bibles full of populist oneliners, extremist propaganda wrapped into some thin jacket of 'decency'. this infection is everywhere. it hits like bombs, even in circles where you never expected it to hit. one after one, people and groups of people fall into their well designed traps, and the media collaborate as usual. adapting to the new reality. it's not a matter of politics to refuse the new conservative, it's a matter of decency. it's a matter of speaking out. opposing. it's a matter of taking care for yourself. it's a matter of making sure that within a couple of decades, you can look straight into the mirror and say 'i did not contribute to stagnation and discrimination'. choose your position and speak out. or read a history book. 20th century, will do.

get robbed. on a daily basis. by yourself. stop blaming others, because you are also the cause. you are a lonely, willing victim. and you know it. no one forces you to walk the lines which are drawn over your predestined path of life. you want it yourself. it takes some courage to step down again, but you better decide to do that before there is no other option. the future shines bright for those who left it behind in time. they will be the ones who had the time to adapt, they will be the ones who know how to handle. left will be those who will suffer from extreme alienation and those who can't handle a life without the so-called needs they grew up with. the so-called needs someone is talking into you, someone who wants you to believe you are nothing if you do not own them in this or that amount. you will need no fences around your house to protect what you can lose if you reject it, soon.

be a good slave. they command you to be a good slave. a non-demanding slave, happy with his goods, happy with his daily food, a cocktail of sugar-injected doom and fast forwarded images on lcd and led-screens. be a good, slow slave, consume a tiny amount of well formulated and packed opinions and thoughts, presented by the 'better' media. feel good. feel that little bit better. be someone. you are not. it is not that bad, it's in your nature. you want to be better, so you accept also something which is even 60 percent close to what you have in mind - and those 60 percents consist of 50 percent surface. image. when you look like those you have in mind, those who form a group you secretly want to be a part of, you in the end will start to behave like them, and others, yes, even maybe yourself, will believe you are one of them. you can do it. you prove it all the time. slave.

don't try to escape hyperdiversity. it makes no sense. anyone telling you a different story is chasing - in the best case - some nostalgic utopia. on the one hand you generously benefit from the fruits in this global village, the ultimate network, the rapid movement and the eradication of physical distance. on the other hand you block yourself from the logic result - we all mix up, we all 'sacrifice' static dead cultures of regions to get some new, rich and insanely interesting hybrid. those who try to escape will lose. double and big time. you cannot accept one, yet refuse the other benefit. they come in a package deal.

don't stop to reject. a basic rule. the moment you quit rejecting, the game is lost. there's no other option anyway. pick and choose, don't you ever even try to follow all impulses which are thrown upon you. not the single message and impulse, but the insane amount, on a daily basis, is a well disguised trap, not set up on purpose, but a tragical and to some groups, functional side effect of the era of information technology. those who survive, are those who don't fall into this trap, and have plenty of time left to stand up. to resist. to reject also. nothing feels as good as rejecting streams of information when your entire surrounding is close to injecting them straight into the veins. no one ever gets a single second of wasted time back in the end. every second counts. every blink-of-an-eye, tons of gigabytes flood over servers and computers and cause a gigantic tsunami of information. some of it relevant, some of it even essential, most of it useless. but the world keeps on turning, whatever you decide to do. we are all sitting on the front row to witness the information-apocalpyse. there will be plenty of victims.

media terrorism is dead. too late now. in merely a decade and a half, true media activism and - terrorism drowns in a sea of information, multiplied, tripled even - every minute. gigantic waves of trillions of gigabytes flood your land which once was your warzone.

be an activist again instead. scream as loud as your voice can scream. this war ain't over yet. no way.