by m.o.a.t.a. omen & the rorschach garden 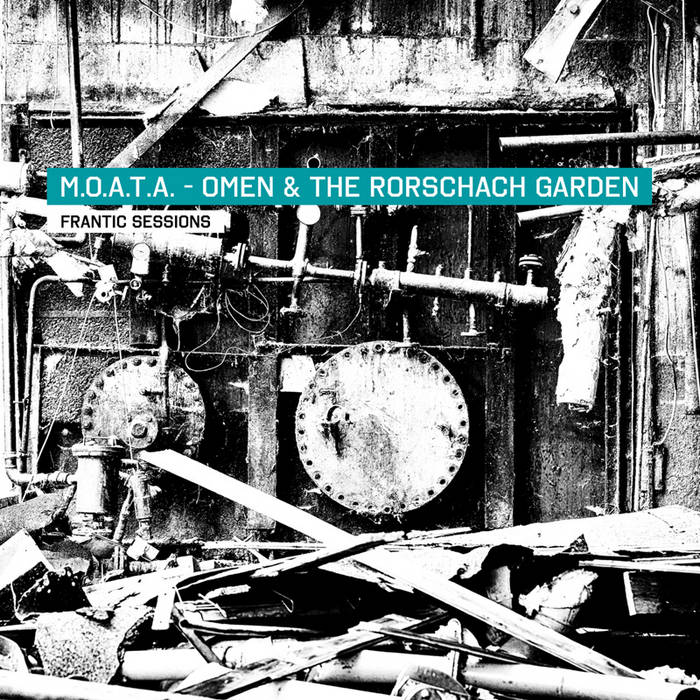 twenty years after their conception, the frantic sessions are finally made available to the public in a collaborative effort by raubbau and ant-zen. an old school lesson for a whole new generation of disciples: oscillating between noise and rhythm, drones and ambience, these 14 tracks are drenched in minimal monotony and repetition, seething with feedback, topped off with the occasional distorted croon of m.o.a.t.a. - omen. 'frantic sessions' preserves the original raw and unpolished sound of its age, which is now all red-and-hot again, stirring it with the underground clubs and via the likes of the berghain into a larger crossover crowd. history has swung full circle, and the full fascination and youthful energy of this material feels just right - now!

biographic background:
sven pügge and philipp münch met in a self-governing underground club in 1989, and with the addition of a guitar player and the occasional help of philipp’s younger brother started the rather productive underground band ars moriendi - which now enjoys cult status posthumously. they were young lads with lots of time and creative energy, so music was happening all the time, also apart from ars moriendi: sven explored the noise avant-garde as m.o.a.t.a. - omen, and philipp pursued the rorschach garden as an outlet for all things odd (before it metamorphosed into the trademark analogue electro pop unit it is today). scarce equipment made it necessary to help out each other all the time, and mom/trg became a regular collaborative outfit, not shying away from styles as diverse as ambient, pop, techno, noise and all things obscure and experimental. via the underground, a few cassette tapes were released (on fich-art and cat killer), and the later caught ant-zen’s attention. the fantasy-themed rhythm noise track 'ash nazg' was licensed for a vinyl compilation and became a club hit (which in some areas is still going strong today); followed by three more well-received recordings for another ant-zen compilation. it was during the production of the due debut album that philipp and sven lost track of each other (except for the two ars moriendi revival shows at the 2002 and 2008 maschinenfests), and only recently the collaboration was revived - and the album finally finished two decades after it was originally meant to be.

frantic sessions - the album:
14 tracks, ten of which are yet unreleased, successfully revive all the energy and creative enthusiasm of the actual recording. 'frantic sessions' covers a range of different styles, held together by a dynamic pulsation, a captivating flow of sounds. if you expect more 'hit' material like 'ash nazg', you won’t be disappointed: 'every nude gets in action', 'oversterilization' and 'alles ist nichts!' are just as on-spot hard, with aggressive vocals, a landslide of dirty bass and actual beats. then there are more leftfield tracks, like the uneasy ambience of 'inside' or 'pashas delight (dub)' or the outright noise blast of 'nerves'. '(y)our nightmares' is best filed under angst pop (a term widely unknown in the 1990s), and 'drop it!' is a surprising excursion into metal dance ebm. all the music is executed with a very authentic and genuine approach, bearing the inimitable charm of a gifted production with limited equipment. 'the frantic sessions' will warm the industrial lover’s heart - and find a new contemporary audience as well!