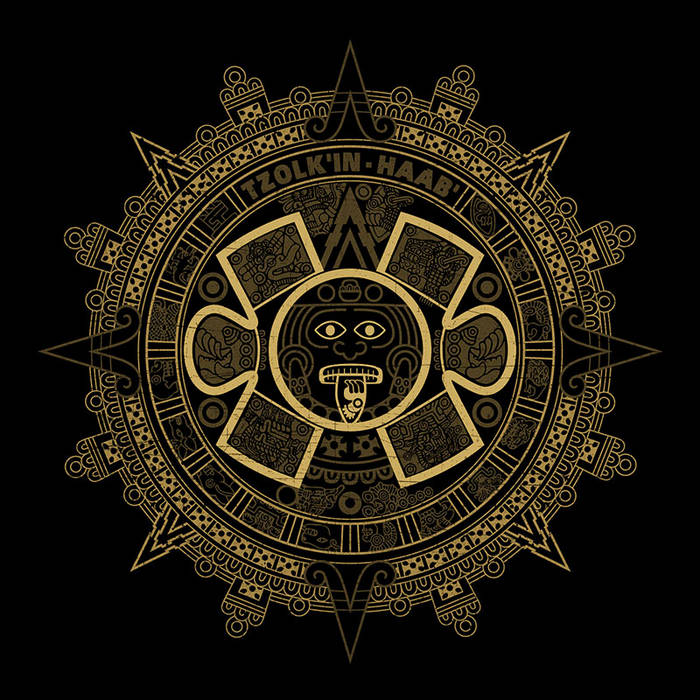 "tzolk'in is the name bestowed by mayanist scholars upon the version of the 260-day mesoamerican calendar which was used by the maya civilization of pre-columbian mesoamerica. the tzolk'in, the most fundamental and widely-attested of all the maya calendars, was a pre-eminent component in the society and rituals of the ancient maya. the word, meaning "count of days", was coined based on yukatek maya. the maya used several cycles of days, of which the two most important were the tzolk'in, or sacred round of 260 days and the approximate solar year of 365 days or haab. the sacred round combined the repeating cycle of numbers 1-13 with 20 day names... so that any particular combination would recur in 13 x 20 or 260 days; the day name and the number changed together: 1 imix, 2 ik, 3 akbal... as we might say monday 1, tuesday 2, wednesday 3, and so on."
(reference: en.wikipedia.org/wiki/tzolk'in)

the musical project tzolk'in is a collaboration between empusae and flint glass - artists who are known in the fields of dark ambient, contemporary ritualistic tribal music and experimental electronica. this project is a conceptual creation inspired by mayan mythology and the ancient mayan astrological calendar of the same name. from the beginning their approach to sound resulted in quite a few novel musical perspectives: the merging of empusae's distinct dark, oppressive and brooding soundscapes and flint glass's characteristic rhythmic and ambient compositions (which are seemingly subject to an almost alien purpose and theme). the final product is majestic and epic, often martial and bellicose, with a sense of tragedy that at times is even quite meditative. tzolk'in can easily be viewed as an exotic soundtrack to the phantoms of a dead civilization or more simply put, music that is inspired by a doomed mayan divination system.

on their first self-titled release, empusae and flint glass chose eight periods of the tzolk'in calendar and on haab' they describe eight periods of the mayan solar year. ceremonious, deep tones merge with the power and strength of industrial music - kept together by elaborate impulsive ritual rhythms that enhance the atmosphere of a flourishing culture. an abyssal, haunting cycle of tribal sound, constructed so that the listener can dive into a bygone era.