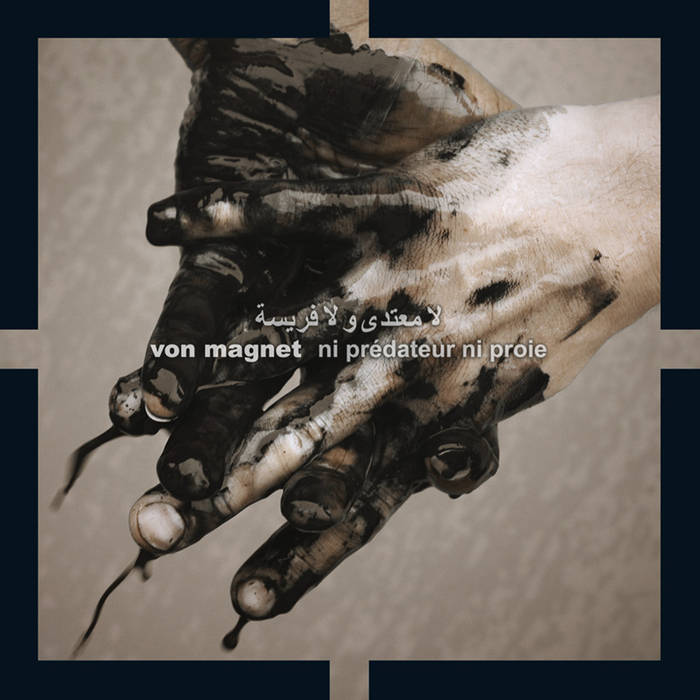 von magnet dreams of the existence of other possible paths; thin and minute. those tightrope walking paths almost invisible. bouncing in between two perils, two poles, above empires, across frames, which can slip through the breaches of any walls. that is the story of this album. when rage is accompanied by tears. this album is our reaction facing the brutal reality of our world today. a world under pressure where all is put into opposition, where everything would like to divide us and where we are being arbitrarily dictated the absolute necessity of a choice. but with "ni prédateur ni proie" (neither predator nor prey) we will not choose our side.
there between partial / impartial, north / south, subjective / objective, orient / occident, coward / hero, poor / rich, indifferent / partisan … we will remain bare handed, like astonished and turbulent children dancing on a mine field. we will just stare at you, we will fall into rage and boil into tears. within this emotional turmoil, flore magnet and the turkish actress esra bezen bilgin replace women where they are never welcome. women of multiplicity, violence, engagement and resistance. phil von gives way to the voices of the rom kids of mostar and the jewish and palestinian actors from amos gitai and hany abu-assad movies.
at their side, def sharpens his analogue bass lines and darkens atmospherical ambiances which often feel like "war". scattered explosions, shots, crackles, complaints or laments. only our guest, kurdish sufi musician mübin dunen softens the crawling tension. his ney bringing our clamour down to a silent light thread. now von magnet signs a harsh, raw, urgent and poetical piece, mixed and produced flawlessly by master norscq. another dary fusion which binds classical music flavours with oriental rhythms, tribal percussions within neo industrial electronic soundscapes. here orient is not any more sensual and phantasmagoric, it is rigid and almost cold. here occident is no more sparkling and victorious, it is sad and decadent. nevertheless "neither predator nor prey" is the length of rope which suddenly ties them up, confronting our hearts to dive close to the abyss.