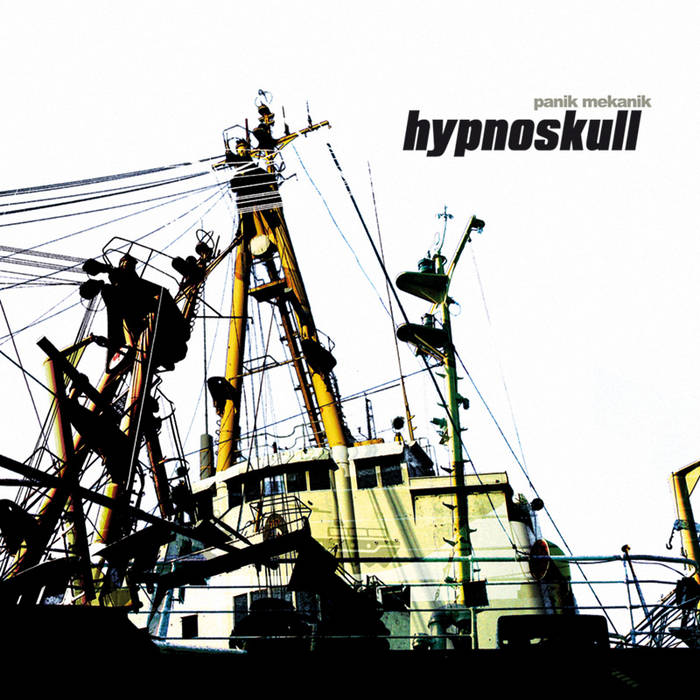 "panik mekanik! it’s been 1 year and 22 days… it was a known sekret, only for those who were shit right in the middle of it all. the silence was overwhelming and lay the earth in a somehow strange atmosphere… it sounded like that autumn-walk-in-the-fog. empty. desolate. alienating. nothing ‘fun for the masses’ or silly televisionshow-spitting-commercials for goods we have for ages or minor updates of them, only done because of hidden-marketing-strategies. evolution and innovation became a mass-marketing tool and is limited to the maximum. no more razorblade-cutting-of-high-polished smiles in faces that passed away before they even died because they obeyed every three-piece-suit-wearing self-declared ceo and crawled on the floor for him. it’s been 1 year and 22 days… no more tailor-made workingpieces, recreated, reshaped and moulded for easy-successes, based upon massive copycatbehaviour and aiming for nothing more but consolidation. fame. word. no more that shameless hunting for respect. no more fear for reactions-that-change-like-organisms. generations pass by so fast in time. it’s been 1 year and 22 days… undercover, hidden, spreading rumours. reshaping the massive body and shitloads of destroyed pieces of the heritage were puzzled together like a transformer - new style. i have spraypainted my anger to a wall and ten minutes later i tore that same wall down. broke every single brick into 3 pieces and dug a hole in the ground, buried them in concrete. bye bye. it’s the foundation for a new construction, and sure as hell we need no architect’s help for that. fueled the car, pushed the pedal to the metal and raced away, 6th gear, 190mp/h. balancing on the edge. i did not choose your well designed and balanced scheme, i did not erase the danger - it’s my food. i eat it for breakfast 365 days a year. terrabytes of disinformation break any silence you could possibly imagine in your sweetest dreams. make place for the new gatekeepers and watchdogs, if you don’t, they will smash you down to the floor and kick you wherever they can. they are the new gladiators of the 21st century. i am part of another generation that believes to be on top of human civilisation. only few people see the joke of this behaviour. the rise and fall of the empire of mass media and its subtle game of manipulation. we all know their victims : information junkies who challenge the human capacity of the brain and mind. balancing on the edge of overcapacity, probably resulting into sheer frustration when they meet their limits. pick & choose. be smart. do not go all the way. (ab)use technology but stay in command. question any rumour, check, double-check. research is the keyword. stay tuned but dare to step out and work it out in a controlled environment. keep in touch with reality, however difficult that is to see it clear. noisebursts of elektrosmog might be changing any view and adapt any situation. be smart. only the smart will survive, not the strong. intellectual mindfuckers sit down in easy chairs, smoking cohiba-cigars, passing bottles of courvoisier, forming closed circles of ‘equals’, creating their mastermind plans that establish their wealth without thinking about anything else, worse, even ignoring all ‘disturbing’ facts and elements, so nothing comes inbetween them and their silly plans. the industrial revolution = the media revolution. short term thinking mediocrity of the worst kind. the mass media generation is losing it. the new cathedrals are malls. 24/7. day and night, all year long. the altars only take cash. your cash. we are not escaping from it. not me, not you, not them. we all are like floating on this river, but who know were it will come out? it’s been 1 year and 22 days… mind isolation. superfast conclusion. we threw away our past and history. throwaway-culture. fast forwarded consumers of the new era. we did not learn any lessons - memories fade away and become history - something written in books or seen on crappy black/white film. some day we might get the bill for that. some day events will once repeat itself, and all those who died will rotate in their graves, that means, if they were even lucky enough to get one. break down walls, build new ones. jealousy, hate and anger - the ‘holy’ trinity of the weak and blinded. ‘touch me, and that hand will never touch anything again’ - mentality… soundtrack. nanoseconds of essential entertainment cutting, reshaping and breaking into pieces. new and old melting together and forming a hybrid. of a hybrid, that was even created out of two other hybrids before. so don’t talk bullshit about it being new. it is not. i’m very sorry for that. didn’t want to take away your feeling of being hot because of liking (or disliking) it. it’s an unmeasurable small part of history. entertainment. anyone is free to give credit to it or not. it is not important. about 3600 secs. of what? right. it’s been 1 year and 22 days. bad boys scream on top of it all. their programme is not common. they choose a different one. just like you did. away from it all. eternal outsiders. everything they do, others believe they do better. they are not looking for friends or enemies. the transformation has been completed, recently. we threw away the luggage. we do not need it anymore. every time they speak, shitloads of uncountable f-words come out, and they do not demand they should be bleeped out or reworked in a clean version. rather they expect to be banned from waves that float through the air. they don’t need those anyway. the future. the bass. the break. the bpm counters. urban sonik warfare. no casualties - only winners and one giant victory. adrenalin rushes and hypnotism. wassup? do you read me? are you into this? are you following it? do you wanna go? - it’s written all over your face." (patrick stevens / hypnoskull 2006)

if hypnoskull's recent work could be defined in a word then 'diversification' would be the word. he has always been an open minded human being and who collaborates with musicians of all genres. patrick stevens has moved far beyond the 'hardcore' corset he is still associated with. stevens' self-concept doesn't care about 'boundaries' of any kind.

'panik mekanik' perfectly displays that there are no reservations whatsoever in p.stevens' work. on this album you will find a large variety of styles, ranging from heavy breakbeats and drum'n'bass to dark hop and even ambient and soundtrackish tunes. but in each and every note you recognize that it's the unmistakable hypnoskull. fast break-attacks like 'the self detonation device' and 'in thee air' - that's patrick as you might know him from his' high-energetic live performances. 'mekanodruggembryo' or 'basement alpha mission triggerz' show the dark, moody hypno-side - and these tracks only show a few facets...

it took a long process of selections, queries and adjustments to finalize 'panik mekanik', but as always the effort was worth it - the end result being a fantastic piece of work. this is undoubtedly the best hypnoskull album so far - now it's your turn to evaluate!