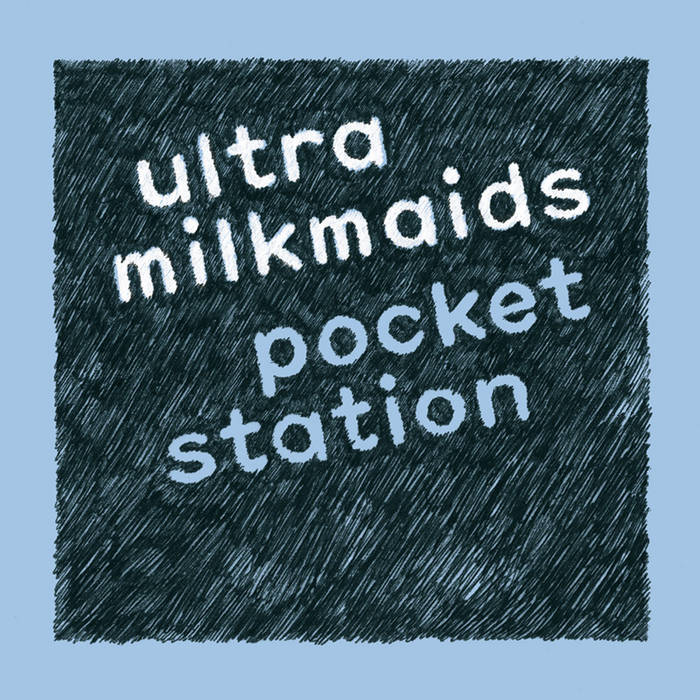 the ultra milkmaids can be found in unusual places: record stores, stages, maybe even on video covers. the ultra milkmaids can also be discovered in many record collections - if you file your records alphabetically then all their records can be kept in one place. but if you sort by genre... trouble may start. 'peps' for example will be stored where all the 'difficult' stuff is - soundscapes, bits'n'clicks, the 'new music' which is actually fifty years old now (if you know how to spell 'pierre schaeffer') - but we zone out. 'pop pressing', well that's another story. if you enjoyed that record then you will park it not too far from your many stereolab and sonic youth albums. with this release, u.m. has returned to the guitar-oriented basics they originally started with in 1993 but now there is the addition of the experimental sound modifications from the 'peps' days.

this new release entitled 'pocket station' is the logical sequel to 'pop pressing'. the band itself classifies the u.m. sound as 'hypnotic and melodic rock'n'roll' - which might look a bit vexing. sure the instrumentation could be used by a 'rock-and-roll-band': acoustic drums, electric guitars and bass. however, the use of the sampler and gbf-moog system mentioned in the booklet stops any comparisons to the rock genre.

what we have here is a truly fine mixture of post eighties experimental rock (in all its varieties) - augmented with the sound ingredients the milkies are well-known for. 'less drem' with it's long sallow synth line followed by psychedelic backwards-guitars and irritating clicks is a perfect example of u.m.'s ability to mold 'unreasonable' styles into one. there is always a surprising continuation within their songs - 'my star' could be a velvet underground cover (with the residents' vocalist as a guest), but in the end the synth takes over - and believe me, this is not a hawkwind tune...

so try this release, let it take over. it might be possible that you will discover new worlds by entering seemingly 'old' ones. file this album wherever you like...