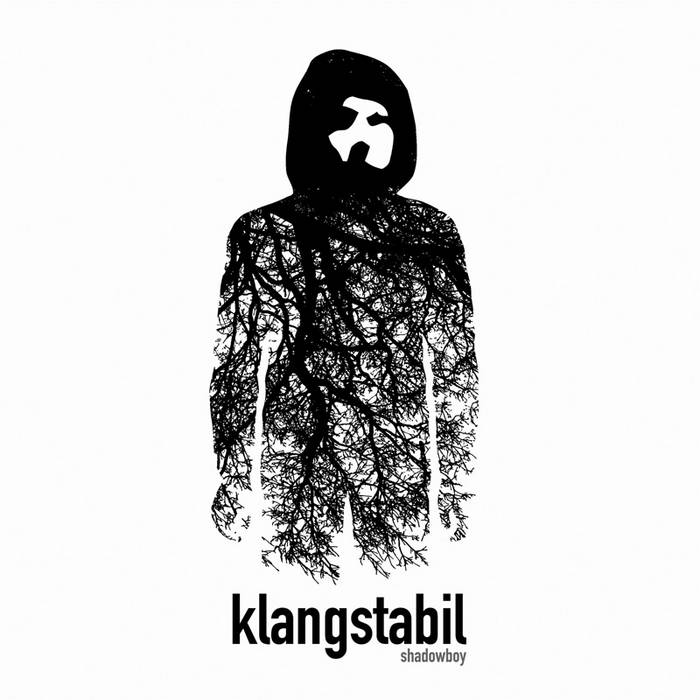 the production of klangstabil's current release took 4 years to realize, and like its predecessors 'shadowboy' constitutes an intimate personal statement. the artificial character 'shadowboy' was conceived by boris may as a result of hyper-sensitive environmental stress which he could only find ease from in a deserted forestal ambiance. shadowboys are beings who often stand alone with their thoughts and emotions. although they have some social intelligence, it is difficult for them to get on with an environment which irritates them, like a city. if the environment does not agree with their well-being, their reaction is over-sensitive. hardly ever perceived by other people, they move along social borders or avoid the public in general. they cannot adjust to rules and laws which make no sense for them. actually, everybody could be a shadowboy. or a shadowboy could be hidden in everybody. a kind of backup, a being in the person, a figure that reminds, alarms, awakes and causes double-vision thinking. the boy in oneself.

to assimilate his impressions boris drafted a story which finally became the 'shadowboy' book written by german author christian von aster. because of an accident, a 9 year-old boy lives for two years in the woods without parents and any contact with humans, until a group of children from the neighbouring town finds him. the story shows how children manage to come together independently, overcome fear and prejudice, build up trust and become friends. the boy learns again how to speak from the children and they learn everything about life in the woods from him. they all realize that they need each other and that the secret of the boy in the woods has to be protected, because the boy belongs there. the book was intended to be written for children from 9 to 12, but also comfortable to be read on an adult level - an allegory about life and death, growing-up, liberty, and the value of true friendship.

the thematic construction of 'shadowboy' opened a wide range of creative possibilities for klangstabil to make their very own musical interpretation of the topic. As the first part of the concept a music video was developed where 200 people would give shadowboy a face. the filming took place at maschinenfest 2010 and at this time none of these people knew what to expect or how the film footage would be used. the video was first screened 2011 live at planet myer day festival together with a first musical concept of the track 'shadowboy - the awakening', released as a free digital single in september 2013.

the 'shadowboy' album was put into effect after the closure of the book and video concept and can be seen independently from the story, describing the thoughts and emotions of a shadowboy, and how to survive being one. the album's main topic was an initial starting point for klangstabil to explore a multitude of related inspirations and thoughts concerning their lyrics which are expressed in the cd booklet at full length. friendship and social cohesion, the loss of one's individual personality on the internet, a longing for entity within a relationship, and a shadowboy's state are just a few facets of this spell binding conceptual work. forging these lyrics into sound and supported by ben lukas boysen (hecq), daniel myer (architect), manuel g. richter (xabec), storm, and fage, boris and maurizio fuse a distinctive aural spectrum of music styles including electro, freestyle, and technoid electronica to a meaningful whole. a captivating song cycle from the distorted, unsettling opener 'shadowboy - the awakening', the hip-hop based 'pay with friendship' and 'arbeitstitel', and the epic techno track 'schattentanz' to the puissant conclusion 'end of us'.

released in collaboration with megahertz
www.megahertz.org