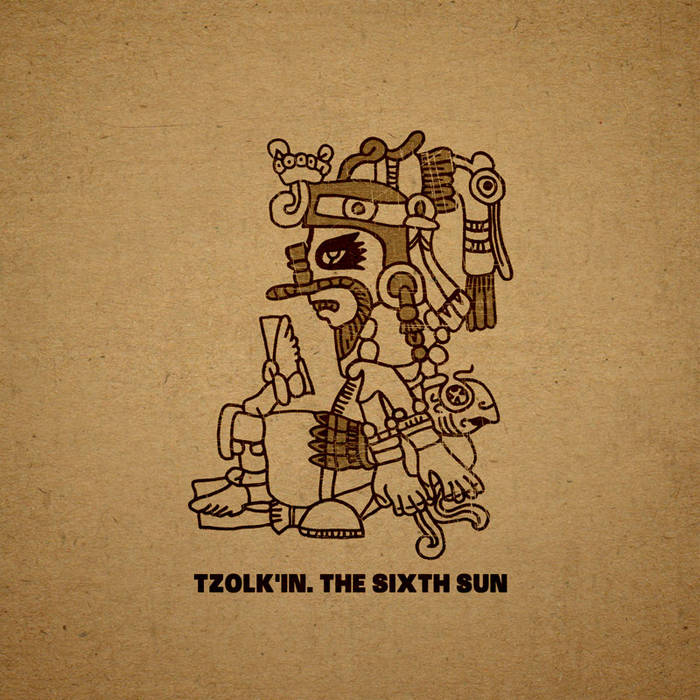 "the mayan calendar is divided into seven ages of man. the fourth epoch ended in august 1987. the mayan calendar comes to an end on sunday, december 23, 2012. only a few people will survive the catastrophe that ensues. in the fifth age, humanity will realize its spiritual destiny. in the sixth age, we will realize god within ourselves, and in the seventh age we will become so spiritual that we will be telepathic."
(the sacred wisdom archives: the aztec calendar, the sixth sun and 2012)

as we have all realized by now, the aztec calendar's prophecy concerning the end of 2012 was not fulfilled, so mankind now resides in the era of the 'sixth sun', one which brings past to present in order to construct a brighter future and this era was chosen as a central theme for tzolk'in's fourth album. seven unyielding tracks named after mesoamerican deities symbolize humanity's new dawn after averting the catastrophe of 2012.

on 'the sixth sun' nicolas van meirhaeghe and gwenn trémorin create a powerful, opulently orchestrated analeptic for mind and body. heavily organic, rich in melodic themes and perfectly mastered, this release represents a plethora of excellently executed ambient soundscapes and predominant tribally infested rhythms. this is contemporary post-industrial combined with ritualistic sounds carrying an almost tantric like feel which was, which is and which always will be this project's trademark.

buried deep inside the chaos of fluctuation lies a truly remarkable opus that requires attentive and full listening to appreciate its depth and range. an illustration of tribal sensibilities from the collective mind of two exceptional artists, executed in a contemporary, cutting-edge electronic medium.