the sound of meat 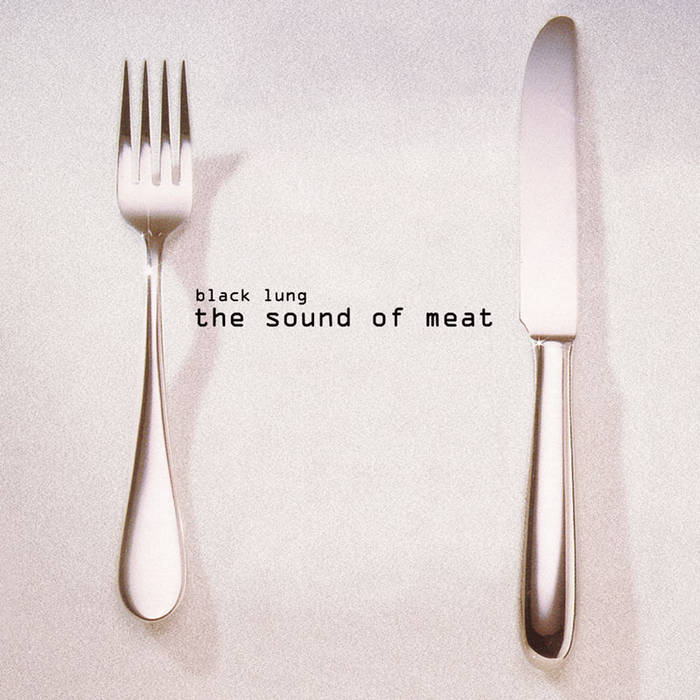 “in our age the enthusiastic carnivore has narrowing options. the onset of epidemics such as mad-cow disease, foot and mouth disease and other perhaps more dangerous cross-species afflictions have made meat consumption an increasingly hazardous activity. we here at the i.m.c.c. research laboratories have produced a safe and convient substitute, “the sound of meat”.an audio track specifically created from the manipulated sounds of meat, meat slaughter and meat processing. constructed from field, kitchen and warehouse recordings, “the sound of meat” is scientifically proven to have none of the debilitating side-effects now known to be associated with flesh consumption. have your “steak” and “eat” it…so tuck in, with a clear conscience and a healthy body.”
(from the introduction by dr john cavendish, m.d.a.i.m.p.h.d.b.s.e., r + d solutions / i.m.c.c. research laboratories, 2003)

upon the conclusion of this spoken introduction, david thrussell a.k.a. black lung launches a new attack on the listener’s mind and body, and as for the side effects, well, maybe there are some which are not noted ...

but one thing that should be noted about this black lung release (after 'rhic-edom') is its specific topic--no wonder that vegetarian thrussell would use it for a record (ironically enough, 'carnivore' is also the name of a diagnostic tool the FBI designed and developed to identify a particular subject's messages to the exclusion of all others - quite 'thrussell-ish', isn't it? but this is rather off-topic...).

the artwork seems quite harmless - knife and fork, that's all. in fact you might ask: "where's the beef?" - until you put the record on. the 'first movement' starts as a collage, including the sounds mentioned in the introduction. now what do you have on your table right now? feel comfortable? huh? aaah, rhythm comes in, so take it easy... easy... right into the second movement which is still rhythmic, but - eh, what about those side-effects... these samples included are a bit... uhm... disturbing.. *burp* - but this t-bone is tasty, sure it is... *gulp* ah, time to turn the record up - the rhythms of 'third movement' are quite faster and harder, can you enjoy it with your full stomach...? ah-ok, there’s still some of your steak left... no, the fly buzzing around is on the record, not 'round your plate so take it easy... but ... what do we have here... what's this 'fourth movement about... huh? it’s as if krysztof penderecki had composed a requiem for slaughtered animals for sampler and classical orchestra.. now can't we get something more soothing for desert... no?...no???... arrrh...*puke*...