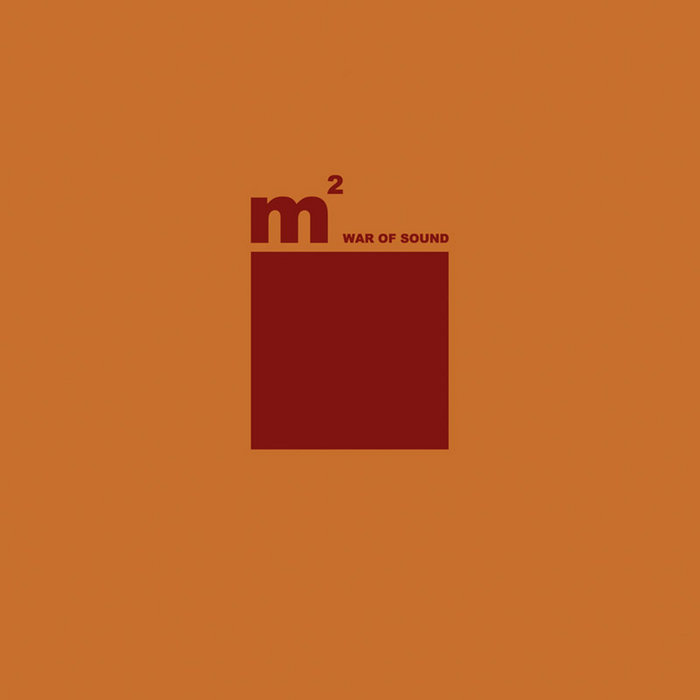 the discord of melkor rose in uproar, and again there was a war of sound.

and so the two hobbits set forth on their…no. this is not an ode to the crass commercialization of j. r. r. tolkien’s ring cycle. it is, however, an album destine to be one of 2003’s most memorable for its seductive darkness, its mesmerizing thematic progression, its complex sonic foundations. m2‘s war of sound borrows samples from a long-forgotten recording about the silmarillion, but the dense sound carnage it conjures up is exactly what we’ve come to expect from mathis mootz.

it’s hard to believe that revolutionary hardcore drum’n’bass producer mathis mootz, more commonly known as panacea, is releasing his sixth full-length album as m2 - pronounced “squaremeter” but it’s true, and in keeping with an unrelenting drive to push himself, mootz delivers an complete and total evolution in m2’s ethos with war of sound.

beginning in late 1999 with 14id1610s, the m2 project took shape as a way for mootz to explore sound realms outside the intensely structured ferocity of panacea’s break-based madness, to work with sound as texture and layer in a contemporary fashion and ant-zen was the perfect means. “i had only one release on the label at that time and not much to do with the industrial-scene,” explains mootz, “so (stefan alt, owner of ant-zen) sent me all the releases he did and out of that i made my first m2 release... he also came up with the name, so i owe him something!”

yet the m2 albums that followed on mille plateaux (sinecore, 2000), ant-zen (kopyright liberation, 2000), and hands (parsec, 2001 and the bitter end, 2002) instead saw mootz exploring the worlds of microsound and glitch through the implementation of various sample sources ranging from the klf to, well, electrically-excited transistors and diodes the size of a few hundred nanometers (laptop, clicks & cuts, etc). but the aesthetic of m2 remained one of the minimalism more often found in sound experimentalists like carsten nicolai and raster-noton, taylor deupree and 12k, and goem - where the value of a sound, be it sampled or traditionally generated, came from its aural texture. until war of sound.

on his releases as panacea, warfare, kate mosh, rich kid, and others, there's an intense, even violent kind of emotional chaos at work that serves to push audiences to release aggression - just check the maniacal happy-hardcore-turned-wicked-breaks sound of last year’s panacea album, underground superstardom on position chrome for evidence. previous m2 releases also have that hellishness imbedded in their microsound textures to some degree, but it’s not as pronounced as on war of sound. thus war of sound begins to shore up the stylistic gulf that has existed between m2 and mootz other projects.

“an artist should always progress with his sound, the actual style of m2 i’ve been working on is more ‘danceable,’ better for live-shows than the complete ambient-like productions i’ve done in the past,” says mootz, whose musical life began at age 6 with voice, piano, and flute lessons and includes vocal recordings with the world-renown windsbacher knabenchor and a degree in audio engineering.

“well, certainly there have been loads of glitch-ambient releases in the past but my live shows with m2 really showed me the necessity of beats. i just didn’t want to bore people with the ultra-reduced soundscapes of parsec anymore. also i thought it would be easy to work with rhythm in m2 songs - they are all from 60 to 90 bpm… slow so you can easily bang your head!”

getting to the head banging takes a little while, as war of sound builds in slow, deliberate movements, carefully establishing a dark chord progression in the introductory “the cry of morgoth” that flows throughout the album. this ominous leitmotif is enriched by mootz’ liberal use of vocal elements - both as a focal point via heart-wrenching voice solos and the evil-toned narration from the silmarillion, and as somber texture in the distant sounds of a purgatorial choir. on the second track, “turbulent sound,” more characteristically clickish m2 sounds penetrate war of sound’s macabre fabric, where laptop glitch elements akin to sinecore’s microsound aesthetic pepper the music before cracking into a blistering break that foreshadows the tempestuous driving synth pulse of “discord (war of sound).” “the music seized” offers a melodic respite with gentle ambient tones that makes the metal-tinged pounding of “the scourges of fire” the malevolent zenith of war of sound, with its thunderous echo and martial tempo. the rancor continues into the denouement, “thus began also…,” another glitch-filled affair married to overtones of synth oblivion. war of sound ends on the prophetic minor chords of “in ages forgotten:” and the melodies which had been heard before foundered in a sea of turbulent sound.

mootz says that although he enjoys the pernicious tone that the silmarillion samples bring to war of sound, he nevertheless still derives a lot of inspiration from early techno and ambient music, including among other artists, the orb, messiah, and the klf. but that’s not the only thing filtering into war of sound.

“it’s because i used much more musical layers making these tunes than the other m2 releases. i wanted this record to be truly dark, cuz i’m sometimes fascinated with all that dark ambient and satanic music crap that’s out there that’s merely a joke! i wanted to make the ultimate satanic record!”

whether war of sound is the ultimate satanic record or not is up for debate - imminent starvation, hypnoskull, and lustmord may have something to say about that. but with a new dj scud collaboration (the redeemer on position chrome), new panacea, rich kid, and another m2 album on the way, mathis mootz may lay claim to the “prolific satanic record” title. you can decide by checking out war of sound first.