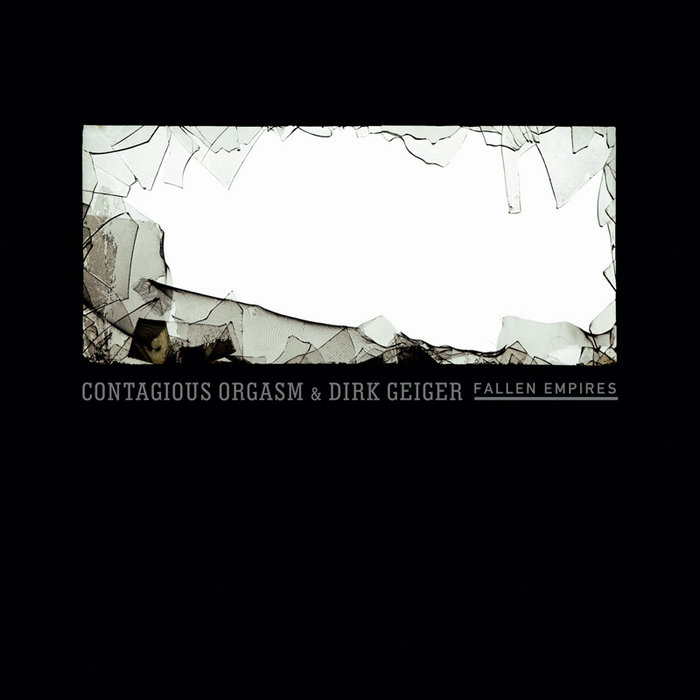 since 1987, japan's contagious orgasm has been active in many intersecting and diverse areas of experimental electronic music, including noise, industrial, rhythmic noise, and ambient. an important and prominent aspect of this project's work are the numerous collaborations with artists from all over the world like bad sector, atrax morgue, kotodama and brume. for this recent release, c.o. is working together with the german based electronic musician dirk geiger. dirk was born in 1975, and has been involved with music since his youth. in 2002, he formed the music label raumklang music, releasing works from artists like hotaru bay, klangstabil, tapage, pandoras black book and his own debut album ‘dondukov 15‘. for the past few years he has been working on a self titled solo project in which he mainly produces music that could fall into the genres of idm, glitch, and ambient.

on 'fallen empires', the two collaborators generate a cinematic masterpiece of ritualistic ambience. captivating atmospheric synth pads, well-placed field recordings and samples, melodic sequences and dub-like use of echo effects carried on a diverse collection of beats, adding up to make impressive soundscapes of beauty and menace. this album is finished with a dark electro industrial remix by philipp münch, strongly reminiscent of cabaret voltaire and a melancholic orchestrated version of the track 'resistance' by p•a•l. 'fallen empires' describes the downfall of man-made empires. the end of the beginning. the hopelessness of contemporary civilization. their fear and their anger. captivity in a society whose values are no longer your own. the fight against it, to preserve freedom. and the focus on what nobody can ever take away.... your inner freedom.