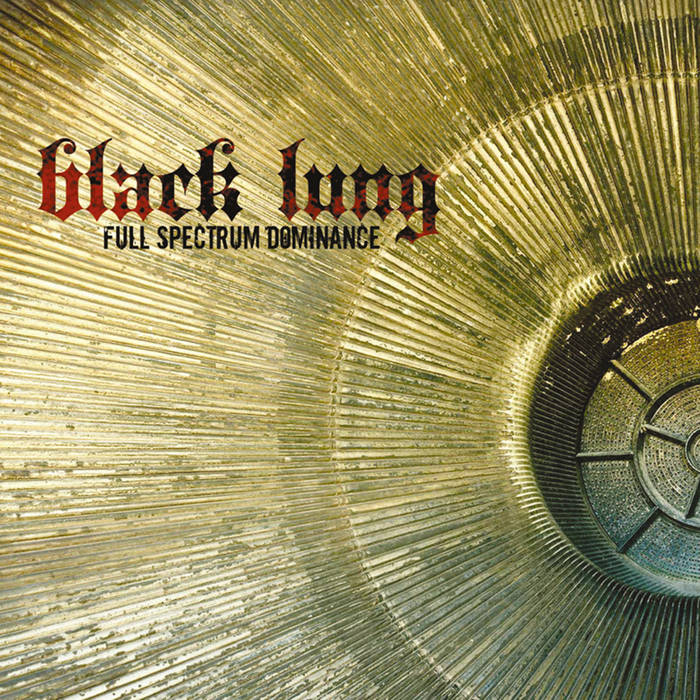 full spectrum dominance sounds more like black lung than any previous record: a unique and powerful mixture of electro textures perforated by sudden breaks and lashing aural outbursts. pounding synthetic and acoustic beats carry a heavy load of variety ranging from clicks'n'cuts, cinematic soundscapes and dub-oriented sub basses up to complex sequential patterns qualified for any kind of motion.


march 2008, in one of the most unusual events in contemporary music history, notable electronic/alternative musician david thrussell is commissioned by darpa (the defense advanced research projects agency - a funding body of the u.s government and the pentagon) to produce a recording that reflects the ideals and reality of vision 2020, a futuristic military strategy program that first saw the light of day in may of 2000.

“the design was twofold,” says darpa media liaison thomas steele, “to deliver to the men and women working in some of the pentagon’s most challenging fields an inspiring soundtrack to their daily working lives, but also to present to the general public information and a view hitherto unconsidered of some of the lesser known branches of our military.”

working with a sizeable budget and unprecedented access to defense installations and personnel, thrussell took over a year to complete the project and wove many field recordings as well as the sounds of sensitive hardware and technology into the final product. “one of the greatest thrills for me,” says thrussell, “was setting up a full p.a. inside one of the icbm silos at vandenberg air force base, california to run and record the final mix on the title track full spectrum dominance - room ambience and all!” incorporated also are actual recordings of top secret military activities in the upper ionosphere generated from the haarp base in gakona, alaska, “if i told you what they were up to there, not only would you not believe me, but i’d still have to shoot you!,” chimes in thrussell with a wry smile.

asked if he sees any conflict between his latest project and his past stance as a sometimes critic of government and military activities thrussell is quick to retort, “no, not at all. i see my role first as a musical journalist - to present the information - there’s plenty of time for editorialising later. and...,” he continues enthusiastically, “i’ve even invented my own sub-genre to describe the album’s unique, crunchy, downbeat sound - grave-step....” he smiles another beatific smile without the faintest trace of irony.

the project, comprised as it is of both motivational tunes and immersive soundscapes, has already been deemed a success by the personnel at vandenberg, if play counts on ipods and over the base address system are anything to go by. the darpa arts liaison fund is proud to present the new black lung album full spectrum dominance. available to the general public june 2009 through all discerning music outlets.

1. the imperial march
let’s start at the beginning. a tribute to those who inspired our noble project - the brave men and women of the first colonial era - who sought to unify the globe under the harsh but righteous yoke of imperial tutelage.

2. the hostmen of tyne
little known today, the hostmen were notable pioneers in the field of aggressive resource management. one of the very first large energy cartels to deliberately engineer calculated energy shortages for fun and profit. the oil and other resource giants of today have modelled their business plans after the hostmen with great success.

3. full spectrum dominance
our great, golden goal that grows closer with every day. the ability to manipulate, frighten and cajole “the great unwashed” (and the “heathen hordes”) into any thought, any action or inaction (no matter how inimical to their own true interests). the “war on terror” (accomplished with the aid of the massive “black budget” funds of our intelligence services and the collusion of our dear friends in the mass media) and “global warming” (furthered through impressive weather and drought manipulation technologies like haarp and, again, our dear friends in the mass media) are just two of the most obvious examples of the masterful “sleight-of-hand” that sends the slovenly herd in the direction of ultimate control and the mass culling we require under our grand project.

4. the territorial imperative
that blessed urge. as the somnambulistic herd scratch and scrape through their indentured servitude (forever chained to the worthless “suburban dream”) the grand project continues apace. reanimated colonialism conquers lands and peoples with a fluctuating currency and a fractional reserve where powder and shot once scuffled through the heartlands of darkness . for whom will renounce serfdom, if the vassal be ignorant of his slavery?

5. the regulator plot
the “free market” is best regulated and caressed, pumped and primed to expand and contract thus delivering its vast pyramid scheme of riches to those at the top, those that can best utilize them. shrouded behind veils of jargon and obfuscation the inner mechanisms of control, while obvious to the enlightened, are a mystery to the enthralled chattel.

6. the great unconscious
without whom the grand project would never have left the gate. swamped in an ocean of trivia and titillation, of “politics” and provocation, the bovine mass sleeps through its bondage. we, the great shepherds, through our think-tanks, institutes, “public education” and the soporific haze of the mass media, steer the herd into the valley of death.

7. the wonderful wizard of ounce
from behind his curtain the venerable banker pulls at levers and punches at buttons to generate the illusory lifeblood - money. worthless, mythical and addictive, these tallies have captured the survival instinct of the species. not bad work, for what is in essence a piece of paper or a collection of pixels on a computer screen. through methodical, tireless manipulations, those that pronounce and celebrate their “freedom” the loudest are indeed those most bound. hypnotised and enthralled as the wizard waves his wand.

8. the world without us
we are told that one day the sun will expand and extinguish all life on this planet. so in a historical context fear of extinction is an illogical luxury. the grand project proposes the extinction of many for the betterment of the few. a noble design that seeks to purify the species of some of its more redundant branches - so that those more able and best qualified by breeding and refinement can enjoy and exercise prudent stewardship over spaceship earth and its environs.

9. the feminine void
naturally, all good things must pass. after a golden age of productive totalitarian control over a cowered and fearful populace, the planet will eventually collapse into dust and disperse back amongst the cosmos that spawned the entirety of our creation. aeons of warm silence await us.

10. the neuroses of nostalgia
the future beckons with open arms, and only the foolish or the benightedly ignorant resist her welcoming advances. as society re-orientates itself toward a more streamlined, efficient model only those blighted by sentimentality will look back upon those gone or about to be liquidated with affection. history favors the bold, and we have mobilized and acted daringly, devoid of the shackles of unsustainable compassion and quivering humility, to produce a “near present” of full spectrum dominance, ensuring control rests with those most capable to exercise it.