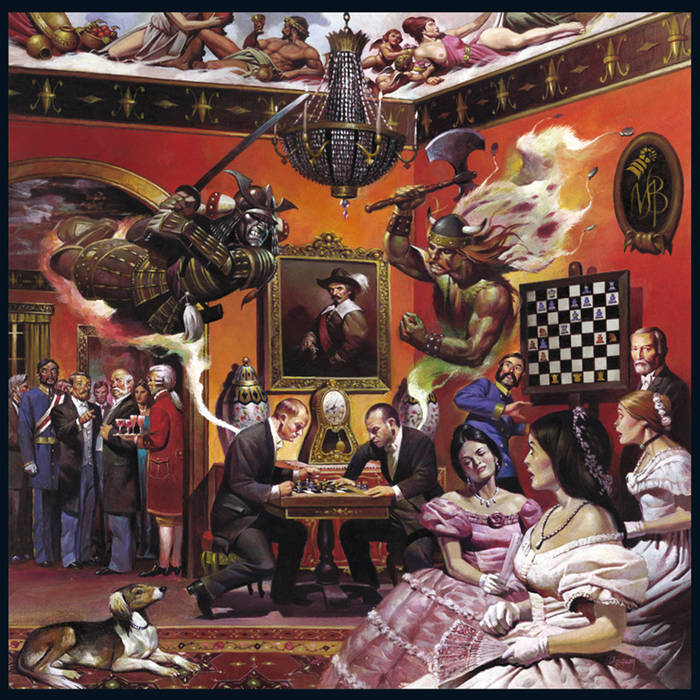 to unite the apollonian and the dionysian, the rational and the exstatic has never been easy, which is why the greeks had a god for each case. it is to be noted that music falls within the area of responsibility of the rational apollo with his muses, but dionysos was always ready to get the party started and turn the volume up. to paraphrase salman rushdie from "the ground beneath her feet", that the struggle of the great musician is to try to set the pure, clean tones of apollo’s song in movement to the impure rythmn of dionysos.

each epoch has tried to bridge the dichotomy in it’s own language, in the baroque with ratio and god, the romantic with power and nature, the modern with disonance and alienation and our post-modern with rythmn and the medial self. each an existential answer and question to our human condition.

our sensual awareness is steered by our emotions. questions of awareness are existential questions both philosophically and literally. emotional morbidity can lead to untimely death. perhaps the more a person encapsulates and isolates their emotional condition, the more pathological becomes their state.

nothing perhaps represents for us the spirit of deferred gratification and balanced power more than the game of chess. nothing seems so mysteriously ordered, 8x8 the 64 squares and the hierarchical pyramid of feudal order. it may say something of the origin of chess that hindu teaching guides us to the 64 abilities a man must master, or the 64 combinations of the 8 categories of erotic acts in the kama sutra, amongst other similar combinations. likewise, the i ching demonstrates in 64 hexagrams the manifold universe as the sum of 6x odd and even. the master, as opposed to the computer, has stored the combinations through experience and chooses the next move as the intuitive sum of all this experience just as the random fall of coins opens the door to an oracle.

all art has to be understood as speaking first to the heart. when a clever artist today says that he or she wants to make us think with their attempt to shock, then they have failed to understand either art or us. art speaks to our emotions first and not to our rational faculty. we feel first and ask questions later. the first steps to mathematics starts in our emotional awareness.

our feelings come and go, are true for a time and then change. in the moment that i feel, my feeling is unequivocally true, whereas anything i say rationally, including this essay can be argued about and disputed. that 1+1=2 is something that nobody will dispute either, but 3-1=2 is also true.

once again klangstabil approaches the squaring of the circle.

(excerpt from 'math & emotion - a prologue', written by alasdair macaulay)

the idea of producing a concept album about chess arose in the summer of 2005 when boris may started cultivating an interest in the game to find a way to overcome his growing mental laziness. maurizio blanco also liked the idea of turning chess into a musical concept. chessboards and relevant literature were aquired so as to get into to the spirit of the game. originally, the title of this album was planned to be "mindchess". later on, it was transformed into 'math & emotion' because this title reflects the way klangstabil learned how to play the game. "the concept 'math & emotion' became wider and overstepped the limits of a mere game of chess. it was projected on interhuman behavioral patterns in the everyday game of life." (boris may)

at the end of 2005, boris may was captivated by the idea to make a cover for 'math & emotion' in the dime novel/ghost story style of the german "gespenster geschichten" comics. these ghost novels were pulp fiction that was published in the 1970s and that impressed him deeply in his childhood. after some research he was able to contact the artist who did the cover paintings, ugurcan yüce (can). boris may: "since he is not only a painter but also a musician, we got on to the same wavelength very quickly when the concept of 'math & emotion' was explained. i explained how the chess theme should run through the whole album." this contradiction is visually realised by two archetypal spirits emanating from boris may's and maurizio blanco's bodies to fight the deadly match to the end.

the music on this album seems easily accessible, resuming the path klangstabil has been on for years. the first impression to the expectant listener might be undiluted dark electro-based pop, but this isn't an inaccurate evaluation, as they call it 'klangpop'. massive synth surfaces, pulsing sequencer patterns and intense vocals intertwined with precise computerized drum beats add up to memorable tunes. on closer examination oblique details become visible: elaborated rhythmical work, hidden sound fragments and the specific tension klangstabil are well-known for - all aided by significant lyrics in german, english and italian. the more you engage in 'math & emotion' the more the deepness of this release will develop - just like the seemingly simple game of chess and the game of life.