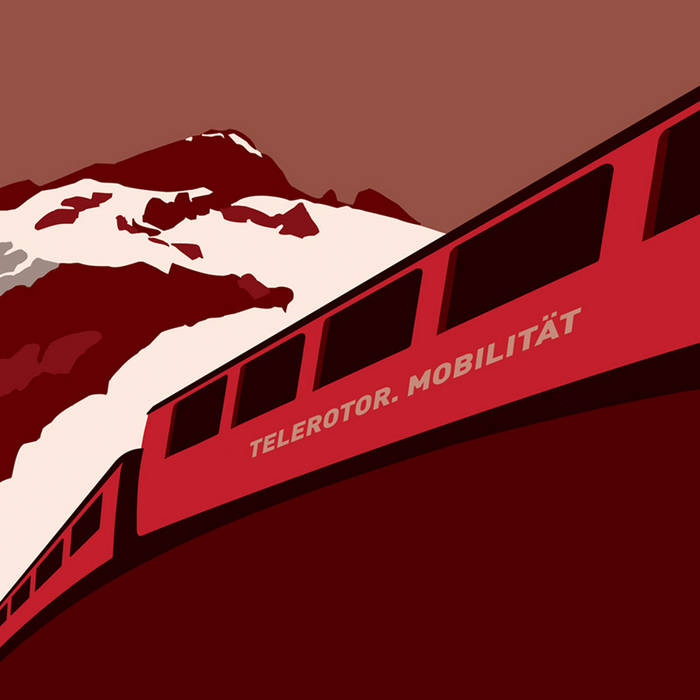 this record's topic was inspired by two different focal points:
first was the fascination in regards to the "acquirements" of swiss tunnel construction, which resulted in the ability to access all regions including mountain heights. the other aspect: mobility which can be a facilitator in observing the lives of people in other countries and thus a way to enhance one’s own personal horizon. telerotor as an artistic project is also profiting from these possibilities; the utilization of today's changes in mobility makes it possible to create music in one place even though the different artists come from different countries.

mobility - represented by the railway service - developed as a progressive way of life. the railway system is also a vehicle for industrialization and is therefore a symbol for progress. the last one hundred years has produced global traffic connections that have been created through enormous efforts and achievements. the world has become a global village.

although man has created a huge variety of time saving tools and gadgets, it is a paradox that we feel we have less time than our ancestors' generations. the frustration of having less time and the desire to have more time seems to have increased. life has become an endless rush of appointment to appointment.

when travelling by train, people get the feeling of high speed traveling for the very first time. landscapes that rush by the train's windows have changed perceptions. things passing too fast do not cause an impression. the elemental concepts of time and space are staggering. space is eliminated - only time remains. and now time is 'tamed' by exact chromometry, f.e. time tables.

therefore, it seems that we have become "enslaved" by time. everyday life and the daily rush and distress has become a burdon. why did life become speed-oriented?

jeremy rifkin nailed this concept, saying: "until now, we have asked only the question of how best to integrate our lives into the new technology revolution. we need to ask a deeper question. how do we create a social vision that makes these new "speed of light" technologies a powerful complement to our lives, without them taking over our lives?" (citation: 'log off now' by jeremy rifkin, may 26 2001, the guardian)

does mobility nowadays mean nothing else than the bridging of space and time in a fastest possible way?

this topic was transferred into a musical work that consists of eleven parts - interpreting mobility's evolution to a rhythm of life, ordained through speed and time.


"mobilität" was recorded live at roger rotor's studio in switzerland. speed as a factor of mobility is transferred into a constant flow. driving rhythmic patterns personate the basis for ambient soundscapes and field recordings. as telerotor's theory implies: mobility allows both telepherique and roger rotor to collaborate and merge both solo projects into one. no rest allowed - time is separated into 4/4 beats, more than familiar to those living in 'modern times'.