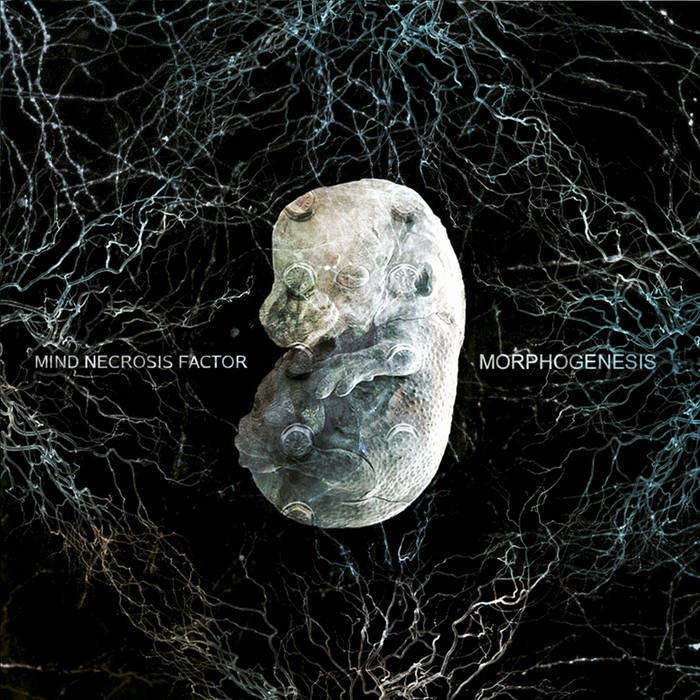 Jyri Straechav This album reminds me at the same time of old school Industrial bands and more modern electronic albums. The album exists somewhere around Dark Ambient, EBM and Industrial. Definitely very laid back with several intense moments scattered throughout the album. Slow moving and surprisingly intense experience that somehow comes across as Tribal music despite the modern instrumentation. Favorite track: immanence.

mind necrosis factor is the project of french composer and musician pierrick coupé who started producing electronic sounds in 2005, with such varied influences as raison d'être, dead can dance and von magnet all the way up to beethoven and chopin. besides his releases for the well-established audiotrauma label he also collaborated with versatile japanese artist kenji siratori for two albums.

morphogenesis (from the greek morphê shape and genesis creation, literally, 'beginning of the shape') is the biological process that causes an organism to develop its shape. with this release, mind necrosis factor wanted to recreate a similar process to combine lots of various elements into a coherent whole - and did so very succesfully.

'morphogenesis' proposes an initiation trip through the cultures and the ages, where ancestral voices are confronted with the deafening silence of modernity. within this album, mind necrosis factor mixes acoustic instruments and predominant rhythms, tribal cries and post-industrial soundscapes with dark ambient atmospheres. beautiful melodies, ethnic influences (f.e. tibetan religious chants on the track 'senescence'), and even a wonderfully well-played spanish flamenco guitar on 'sombras' complement the multitude of aspects present in this artist's work.

more than genesis of a new shape, this album manages to relate the emergence of a mind, from the obscurity of the first moments to cessation of pain. it invites us to look beyond the flesh, to feel the breath of the hidden self inside us, to travel through the dark universe of mind necrosis factor and discover the 'morphogenesis' phenomenon.