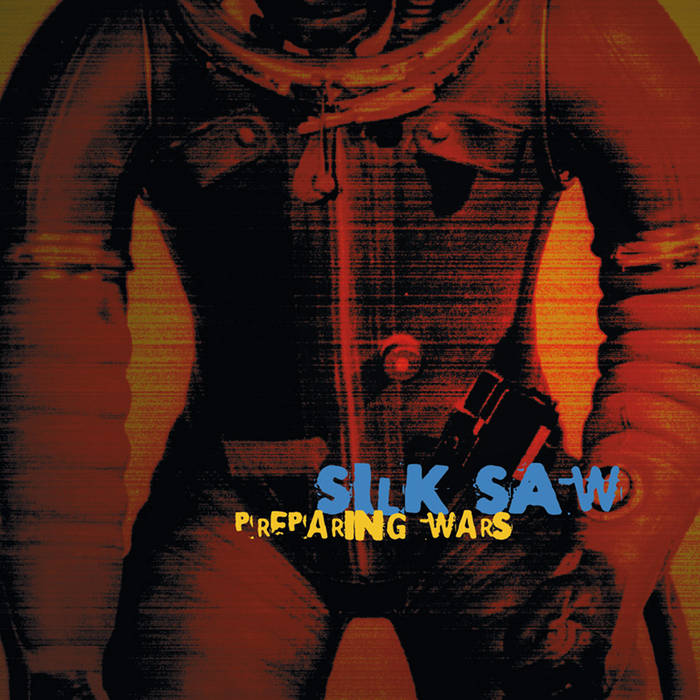 silk saw (marc mœdea and gabriel séverin), a remittent duo who's working desperately hard to cut the edges of music, like this: peregrinations through the abstract, shuffle and superposition of cards, movements of objects, scissors that we grind, tamping, clean sweep of the idiots, pretences, confrontation between the weak and the strong, smooth and rough, pillage and recuparation, laugh at first, then destruction of the mountain according to rule. this enterprise requires the refusal of compromise. thus, silk saw is not a turkish delight for everybody. seriously, let's say that the duo is trying more and more to translate in sounds an intern climate, the humming of the body singing of his own way, the basic vibration, deaf and omnipresent, but that words can't almost never formulate. then, music (in the ordinary meaning) doesn't have so much importance; remain only the impulse, the beating/recognition signal of the body, the ultimate billow wich 'll make us overturn: it gets tipsy and is about to provoke nausea.

all this was already present in jardin d'usure, first project of our two noise makers, but without the groove. a more dadaist (more impertinent) process and in french, wich started 10 years ago. the result at this moment: some performances, a cd (with interpretations of dada poems from hugo ball), refered in marc dachy's book about dada (nrf) and some tracks on compilations (see discography below), 1 hour video (radio days of panic), a t.v. appearance of 7 min. in a broadcast about chaos (intérieur nuit, rtbf (belgian t.v.), 1996 and the soundtrack for le paysagiste, a short by dominique lohle (b.)
1995. after (during) this adventure of jardin d'usure, the duo wanted to become different and to turn towards a larger scene, taking advantage of the opening made by new musical currents. so, at the original project of jardin d'usure, the duo added a more rythmic work. further more, some references to scientific research, especially in the nuclear domain, clearly appear in the silk saw recordings wich stigmatise, non without a touch of humour, the utopia of the scientific process and the inherent dangers in it.

a remark: the cost of all expenses for the 2 first years of silk saw was kindly support by the fonds de la sécurité technique des installations nucléaires du ministère de l'emploi et du travail and by the fonds pour la protection contre les radiations ionisantes du ministère des affaires sociales, de la santé publique et de l'environnement, by way of an exceptional ground. it allowed us some concerts, a live recording for the dutch well known broadcast vpro radio 5 "de avonden" (july 1997), 2 albums, a 12" and some tracks on compilations (see discography below). 2 albums (1 cd and 1 vinyle) will be soon published by ant-zen (september 1998) and later a third cd on sub rosa: the music is now more bare, dense and abstract.