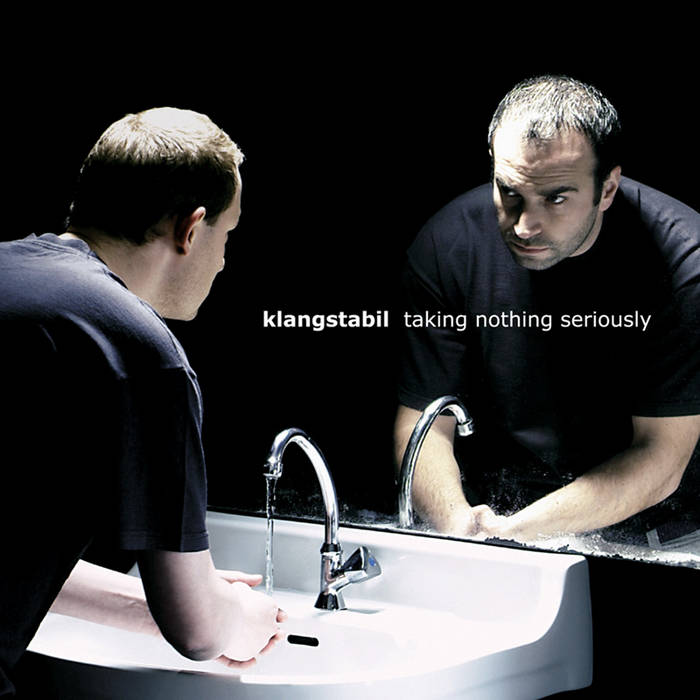 Abstract This release reflects Klangstabil's musical diversity, from classicly ice cold, F242-esque tracks ("You May Start", "Push Yourself") to warmer sounds ("Gloomy Day") and experimentalism (see the end of "A Difference That's For All To See"). Solid album. Favorite track: push yourself.

an artists' statement about “taking nothing seriously”:

there are 8 tracks on the new klangstabil cd, “taking nothing seriously“ and 6 on the vinyl version. the creative work on this, a concept album like all klangstabil albums, took from 2000 to 2004.

the title, “taking nothing seriously“ can be understood on several levels. for klangstabil the meaning is literally to take nothing seriously. whenever one starts considering nothing, one soon gets to the point that nothing is always and in every thing present.

there is only one nothing, but it can be observed from various angles. there are people who struggle against nothing, and others who only live for nothing. the phrase, “if you have nothing, you are nothing” is equally true for a materialistic person, intent on posession, as for a buddhist.

nothing then is universal. for example, where is an idea when it is not being thought? or the relationship to another individual that awaits awakening? potential in nothing.

nothing is beyond the understanding of many people.

the possibilities of being are not preordained. humans do not partake of being in the same way as things. the individual comes from nothing and must through constant creative struggle become what he is. the individual is free. the nothing from which he arises incessantly lies in wait. individual freedom is every minute threatened, with and through materiality, to revert to the state of mere being. the individual can compel itself only through personal volition to leave nothing behind and to challenge its constant threat. the individual and no-one else, not even a god, is alone responsible for his actions.

a human is not just responsible for and to himself, but also for others and to others.

in the face of nothing klangstabil cannot remain neutral, and primarily equates it with a value-void. conversely, the word nothing is played with and gains new possibilities of meaning.

we are nothing, if we let nothing exist.

the textual element of “taking nothing seriously” is remarkable. the texts can be defined as "direct talkin´ lyrics" meaning that they have the nature of spontaneously recorded dialogue. little attention is paid to keeping tact or making improvements afterwards, rather that emotion and content are delivered authentically to the receiver.

the text must live out its own dynamic reality, which can lead to aesthetic conventions being demolished, exploded by their reversal or the leaving behind of the laws of linguistic logic. sentences are simplified, reduced to telegram messages with the aim of realising emotional existence. therefore, to open the meaning, effects such as word conglomeration, or word pictures, or pathos are driven, in rhythmic and metric freedom to the heights of the scream.


once again, you can hear klangstabil's uniqueness on this long awaited release. the musical variety of this record ranges from pop-oriented synth-tunes (“gloomy day” - a different version appeared on the 'daruma' compilation) done over distorted electro-beats to soundtrackish infernos. in addition, the album also explores grindcore (if you are familiar with the klangstabil/schmerzverstärker split-7" you won't be surprised about that). however, mentioning musical genres leads the open-minded listener down the wrong path. a brief description of the music's intensity is hard to give. reading the lyrics and listening to the haunting vocals is as uncomparable - as is labelling 'gloomy day' 'synthpop'. on this album, the message counts, which is the total of music, vocals, production and lyrics.

this is an album which forces you to listen intensely, and it is one of the most personal and emotional records ant-zen has ever released.